The History of the Mini Moke

You are here:
Jolly Blog 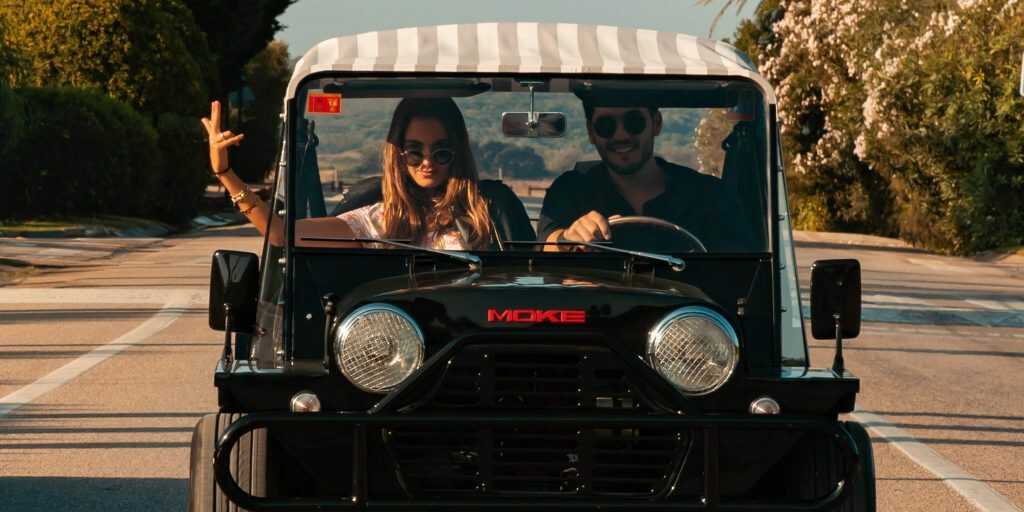 For our second blog by The Jolly Mile I thought it would be appropriate to talk about the interesting history of the Mini Moke and how it came to be the car that it is today and the cult status that surrounds it.

Did you know that the word ‘moke’ means donkey? Despite this rather unfortunate comparison, The Mini Moke became an iconic car to move around in the worlds sunny hotspot areas such as the chic French Riviera, Miami, Australia, and the Caribbean. It became synonymous with stylish holidays and lots of fun and manages to evoke a unique feeling of freedom that few cars are able to achieve. Now its making a comeback, with The Jolly Mile in Sotogrande, Spain. Its once again becoming the must have vehicle. Read on to discover its interesting history and where it stands now.

To many people’s surprise, the first Mini Moke was designed for military purposes as a front-wheel lightweight utility vehicle, back in 1959, for the British army. It was designed by the legendary Sir Alec Issigonis, the inventor of the classic Minis, who prior to creating the Mini, used to design military vehicles, mainly during World War II. However, the Moke proved somewhat unsuccessful, with its low grounding it was too easily stopped by any objects, and its weak 848cc engine was not too popular either, so it was rejected by the army, although the Royal Navy did show some interest in it for use on the decks of its aircraft carriers.

Undeterred by this initial rejection by the army, the BMC (British Motor Corporation), worked on a new design which featured larger wheels, improved suspension, and in general better off-road capabilities. However, the army remained unimpressed. Therefore, in order to recover the development costs, BMC decided to commercialize the vehicle for civilian use.

So, in 1964 BMC then produced a new version aimed for the general public, with smaller 10” wheels, from its factory in Birmingham, England. Production continued until 1968, by which time 15,000 English Mokes had been manufactured, of which only 10% were actually sold in the UK, with the rest all exported. For this reason, despite the Austin Mini Moke appearing on the British television series The Prisoner, production was ceased.

Production then switched entirely to BMC´s factory in Sydney, Australia, where Moke assembly had been taking place since 1966. Here they made some changes to the spec, with larger 13” wheels replacing the 10” ones, and a larger 998cc engine. These changes were implemented to suit local conditions and appeal to a more commercial market.

From 1973 the Mini Moke was then sold as The Leyland Moke, or also know as ‘The Californian’ model. This consisted of a new larger 1098cc engine, and later even larger at 1275cc. 25,000 models had been manufactured by the time production ceased in 1981. However, by this time, Moke had finally achieved its fame and cult status, appearing in the James Bond movie featuring Roger Moore in Live and Let Die, and also proving popular with Bridgette Bardot and The Beatles.

In 1983 production then restarted at BMC’s factory in Portugal under the control of Austin Rover, and lasted until 1989 with around 10,000 units produced. All but one of our collection are the Portuguese model.

In 1990 the manufacturing rights were then sold to the Italian company Cagiva, which produced almost identical looking Mokes to the Portuguese model. The main difference are the back seats, which are individual seats, rather than the bench style of the Portuguese model. You can see this difference with Minty (our white and green Moke). Production continued until 1993, when the last Mini Moke was made. In total, during the 30 years of production, 50,000 Mokes were produced in the various countries.

Present – So What Now?

The Moke is making a comeback! There are now new Mokes being assembled in France. There are two new models, ‘Moke International’, and ‘Nosmoke’. Nosmokes are electric versions of the Moke, and Moke International produce both petrol and electric versions. Aesthetically, they are not as pleasing on the eye as the originals, and not as fund to drive either, but for those of you who are more environmentally aware, watch this space as we may have some of the electric Mokes in our fleet soon!